Posted by megha Posted on April 8, 2021 0 Comments on Meeting in Pairs (IV)
Posted in AGENDA 2021, APRIL, Get in Touch for Internationals 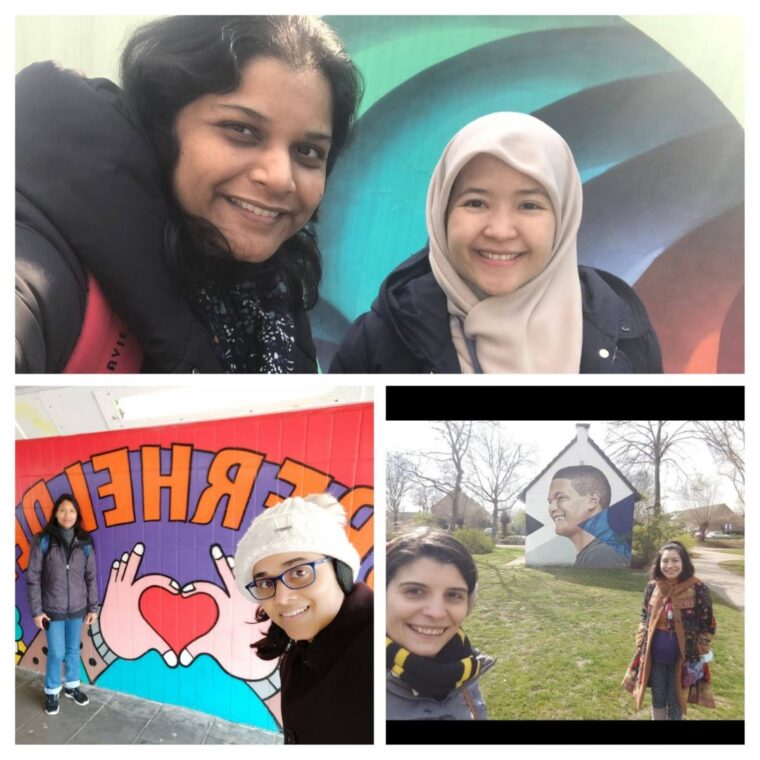 Audrey:
Hi ladies! Today with Laura, we went to the Achtse Barrier Park, mostly because it was close to Laura’s new place and she didn’t have the opportunity to explore the area yet. Fortunately, we found a mural !
Well, the story behind it is kind of sad, the young man on it, Jano, died at 20 because of a car accident and two of his friends painted this mural in his memory. Aside of this mural we also saw a small (communal ?) garden and the park itself is very nice and quiet. We discussed about the crazy house market in Eindhoven, about the difficulty to go out to walk or run in winter and about the fact that all the streets around the park are named after places in France (mostly cities but also regions). We went through Angoulêmehof and I told Laura that Angoulême is a city where there is a renowned French comic festival every year.
After the beginning of the week with the snow, I was quite low in energy but after our meeting I felt recharged 😊 Thank you Laura !

Megha and I met this afternoon and happened to spot snow here and there, both of us were visibily surprised the snow had survived 🤣 this harsh 10 degrees weather. It was fun to catch up after a long time.
We realized many of the art works were done in collaboration with design/ art academies of Eindhoven.
Nice to get a chance to pause and appreciate the efforts of the artists and talk about what it represents.

Binda and me met at Primark, near Eindhoven Centraal and walked through Kruistraat tunnel connecting the Piazza to Kruistraat. And wow did we stumble upon a landscape of murals, art and history. Infact it took us a good hour to just go through this tunnel, which I have crossed in seconds on a bike several times! Megha had to help us contact each other in the beginning due to some connectivity issues, and we realised about Megha and Advaita had just visited the area. We tried to click photographs of the opposite wall of the tunnel and hopefully our photos combined will cover the whole tunnel 😋
We talked about our journeys to Eindhoven, cuisines, maternity, travelling and culture of India and Indonesia. Thank you Binda for a great time and a fun meeting!